Chemo for Canines? Pet Cancer Treatments on the Rise

Chemo for Canines? Pet Cancer Treatments on the Rise 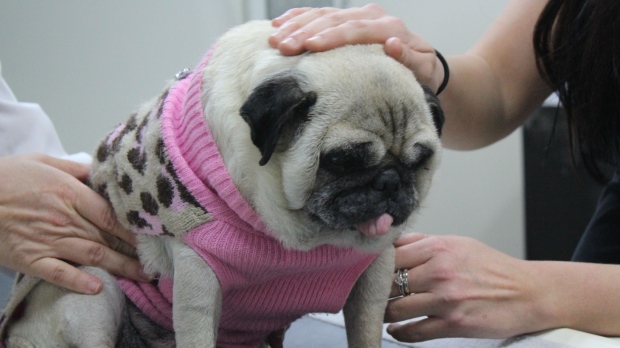 When Sara was 10 years old, she was diagnosed with an advanced form of cancer and given just months to live. Yet two years later she is still alive and enjoying life, something her family credits to the “amazing” medical treatment she received at a Langley, B.C. hospital.

“She just became a miracle,” says family member Rachel Wheating. “When I brought Sara in and they told me how sick she was, I thought it was a death sentence. But it doesn’t always have to be that way.”

This may seem like a typical cancer patient success story, but there’s a twist. Sara, who celebrated her 12th birthday in October, is a dog being treated for lymphoma at the Boundary Bay Veterinary Specialty Hospital.

Vet oncologist Dr. Sarah Charney, who founded the animal hospital with her husband Dr. Geoffrey Hutchinson in 2009, is Sara’s doctor. The number of Canadians seeking cancer treatments such as chemotherapy for their pets is on the rise, something Charney credits to the changing role of pets in society.

“Pets play a different role in our lives then they used to,” she says. “They’re now more like family members. And people want the same kind of medical treatment for their pets as they do for themselves.”

As one of just two vet oncologists in the Lower Mainland, Charney’s caseload is heavy – she sees around 16 to 20 cancer patients a day. Cats and dogs are her usual cliental, although she has treated pocket pets like ferrets and even consulted horse owners looking for treatment.

The ultimate goal of cancer treatments for pets is different than in humans, Charney notes.

“The goal in people is invariably time, and [doctors] will take you right to the edge of killing you with chemotherapy to get you that additional time,” she says. “Our goal in animals is for them to have a good quality of life…and we’re not willing to take pets to the point where they’re getting significantly sicker with chemotherapy.”

Unlike humans, 85 per cent of pets have no significant side effects from chemotherapy, something Charney attributes to the lower dosage used.

Owner Rachel Wheating says she was surprised Sara tolerated treatment so well. “When you think of chemo you think of people getting really sick – but in dogs it is way different,” says Wheating, who lives in Maple Ridge. “Sara didn’t lose her fur, and she would feel better when she got the chemo treatments. It was just amazing.”

Not much is known on the incidence of cancer in animals, but half of dogs that live to the age of 10 will die of the disease.

Charney says more research needs to be done on cancer prevention in pets, although the cancer risk for reproductive organs in females is decreased when they are spayed at a young age.

Lymphoma, osteosarcoma, and mast cell tumours are some of the most commonly diagnosed in pets. Surgery and radiation may be done in addition to chemotherapy treatments, depending on the type of cancer.

Dr. Nicole Gallant is president of the Canadian Veterinary Medical Association, and practices on Prince Edward Island. She says the number of people insuring their pets is also on the rise.

“It’s good for cost management, as treatments can get expensive,” Gallant says, noting that in more rural areas of PEI insurance is less common than in bigger cities like Vancouver.

Not all pet insurance policies automatically cover cancer treatments, and some have maximums for body areas or certain diseases.

It’s great to be able to offer owners the option of chemotherapy when a pet gets cancer, Gallant adds, something that was not possible when she first started practicing 30 years ago.

“Some clients will say ‘no, we’re not going to go any further’ – and that’s their choice,” she says. “As long as the welfare of the animal is considered, it’s their choice. But I seem to be having more and more clients that want to go and explore what the options and costs are, and make a decision from there.”

One deterrent for pursuing further treatment can be the price tag. Without insurance, a single chemotherapy treatment at the Boundary Bay hospital costs between $400 and $600 depending on the size of the animal – and most pets will need a minimum of four treatments.

“Realistically you’re not going to go through a course of chemotherapy for less than a couple thousand dollars,” Charney says, estimating that around 30 per cent of her patients are insured.

Sara the pug received chemotherapy for seven months, and then went into remission. After nearly a year of being cancer-free she relapsed in May 2015, and is currently undergoing a second course of treatment that has been “tougher” this time around.

Yet despite the challenges – and the cost – Sara’s owner Wheating says it’s all been worth it.

“If you look at how many bad days we’ve had compared to all the good days, it’s been really good,” she says, crediting the “amazing” expertise of Dr. Charney and the oncology team.

“[Chemotherapy] bought a lot more time with Sara than I ever thought I would have – I never would have thought two years later she would still be here…it’s all been worth it.”