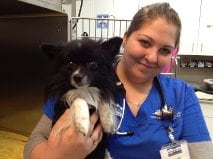 Thank you so much for everything you all did for Floyd. He still faces a fairly long recovery but given the extent of his injuries it felt like our own personal CHRISTMAS MIRACLE happened when he came home a week ago today. A mere five and a half days after he came in on Sunday Nov. 24th with severe trauma from a dog bite.

We knew he was really bad (his lung was coming through on his right side) but until Dr. Hutchinson went in we had no idea just how bad. Three and a bit hours later we got the news that inside…little Floyd was torn apart much worse than anticipated. Dr. Hutchinson and his amazing team put him back together but he was a very critical little dog. He was breathing, his temperature was good but his protein was low and for a while there it looked like his little body just might not be able to fight back. Tues. AM we ok’d a plasma transfusion after discussing it with Dr. Hutchinson, Tuesday late afternoon we saw our first rally from Floyd. The tech (not sure if it was Randi) said he stood up and laid down again!!

Wed. PM. He sat on a table for us to visit…still out of it but sitting! And eating which was huge progress! Thursday at noon when I went to visit Randi brought Floyd to me…I couldn’t believe I could actually hold him and that he could walk around! He still had a back drain in, his NG feeding tube and one IV but OMG! He was walking! It was very obvious how much he had attached to Randi on that visit. His little ears would perk each time he heard her near the door. That night my daughter (Floyd’s owner and the one who saved him initially) finally got to see her boy walk. He spent a few minutes wagging and kissing her, letting her know that even though he’d been out of it…he’d known how many times she’d stood over him whispering words of encouragement and willing him to live! Friday was unbelievable … When I called in for my am update…I was told that if he tolerated his oral antibiotics well Floyd was coming HOME!! We picked up a very happy puppy that afternoon.

He is still going in daily for bandage changing and debriding of dead tissue and may still face one more surgery for closure of his worst wound that wasn’t holding together as well as Dr. Hutchinson wanted but this little fighter is rallying!

“Never cry over something money can fix” well it wasn’t just money that fixed Floyd, it was the incredibly, knowledgeable and dedicated staff at the Boundary Bay Veterinary Specialty Hospital and the fact that for just this once we managed to pull together the money to save Floyd

We were surrounded by wonderful people (family, friends, total strangers and all the vets, techs and staff at the clinic) who went the extra mile right along with us. Without their support (mentally and financially) we could have never done it. People amazed us with their donations (something we never expected at all).

Yes it’s a lot of money but I have worked in this field and can honestly say that never once did I question the care Floyd was getting or the course of action being taken. This clinic, Dr. Hutchinson and the other Vets had my full trust….something that does not come easy.

If you have a severe trauma like we had this is definitely the place to go. The Vets have a lot of extra training in their fields and their care is top notch.

I love my own vet, have been with him for years but Floyd was where he needed to be through all this.