This is ‘Frankie’, a beautiful American Bulldog cross who came to Boundary Bay Veterinary Specialty Hospital one year ago due to lameness in both hind legs.  She was diagnosed with a left cranial cruciate tear AND a right partial cranial cruciate ligament tear by Dr. Geoff Hutchinson.  Frankie’s owner Sharon opted to proceed with Tibial Tuberosity Advancement (TTA) procedures as recommended by Dr. Hutchinson.  The left limb was showing greater lameness so it was the left hind limb that was treated first.  At the 2 week recheck Frankie was doing so well that the right limb was also treated with a TTA procedure.  Sharon followed the strict confinement instructions given by our surgery department and is now enjoying life to the fullest! 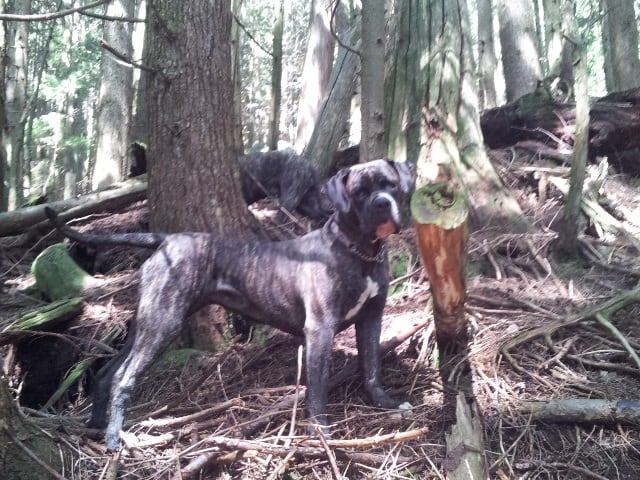 This is what Sharon has to say one year later:
‘I just wanted to say it’s been a year since Frankie had her surgeries on her knees and all I ever wanted was to see her enjoy life again.  Thanks to your skill and care, she is back to being her old self or perhaps a bit bionic!!!  Here is a picture of her taken today enjoying a romp in the woods. Frankie and I both say thank you’.