Impaled by a stick at the park

Impaled by a stick at the park

Cooper, a 2 year old black Labrador Retriever, was recently out for a morning walk with his mom Diane. While enjoying a good run in the park, something terrible happened. Cooper was somehow impaled by a stick. Diane told us that she witnessed the stick enter his mouth and then down his body to past his scapula. Diane could actually see the stick under his skin.

Diane rushed Cooper to the Vancouver Animal Emergency Clinic (VAEC) and after being both sedated and stabilized, Cooper was referred to Boundary Bay Veterinary Specialty Hospital for surgery.

Upon arriving at BBVSH, Cooper was immediately seen by the newest member of our surgery team, Dr. Evan Crawford. A CT scan was performed to allow Dr. Crawford an inside view prior to surgery. He was amazed to see that the stick had completely bypassed the trachea and all major organs. It somehow managed to stay within the subcutaneous tissue.

Dr. Crawford proceeded to remove the stick which measured approximately 32cm long! Cooper recovered well from surgery and was monitored on-site by the doctors and staff of the Animal Emergency Clinic of the Fraser Valley throughout the night.

Cooper did very well and was discharged the following day to be monitored closely by mom Diane and rechecked by his regular veterinarian.

We consider Cooper to be a very lucky boy. For a dog to be impaled by a large stick and return home the next day is nothing short of a miracle. Thanks to Diane for getting him the help he needed and thanks to the VAEC for referring him to our surgery team.

We contacted Diane recently and learned that Cooper has quite the history of getting into trouble!  This is what she shared with us…

‘Cooper is a happy dog living on the sunshine coast.  When he comes to the city, however, he seems to have had his troubles.  This is not the first time the city has bitten him.

He loves other dogs and was playing in the park one day, in the city, when another dog came along and bit him.. quite nastily… he needed veterinarian intervention.
Another time, in the city, he found an old dead rat and thought it looked pretty tasty… another veterinarian intervention, as they pumped his stomach.
Another time, in the city, he went awol and ended up at the shelter.  A night in Jail for Cooper…hence his cover photo on his FB page.
On the sunshine coast, he roams the property freely, keeping the bears away, and has never had a problem.
He’s going to be spending most of his time on the coast from now on!’
Wow, this guy sure has a history!  Thanks to Diane for the fascinating info! 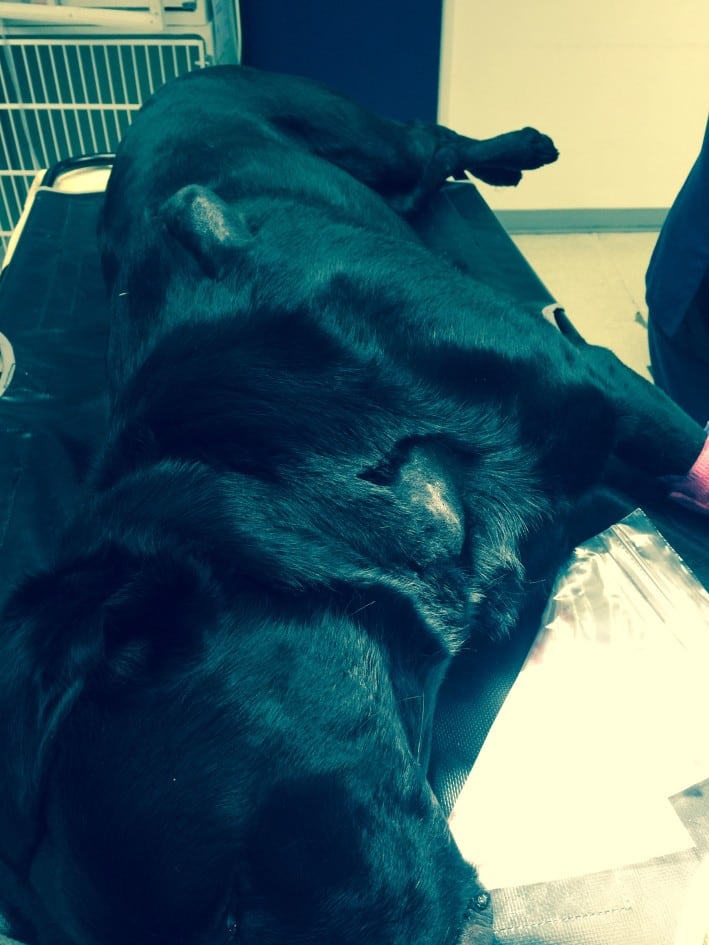 Cooper moments after arriving at BBVSH. 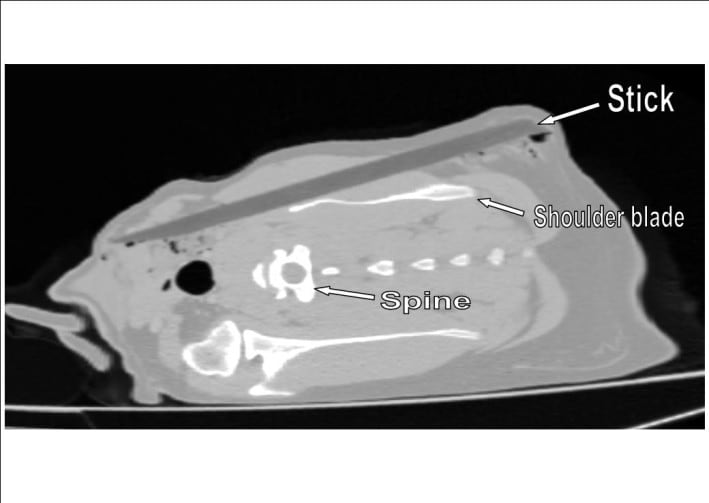 A CT scan of Cooper indicating the exact location of the stick. 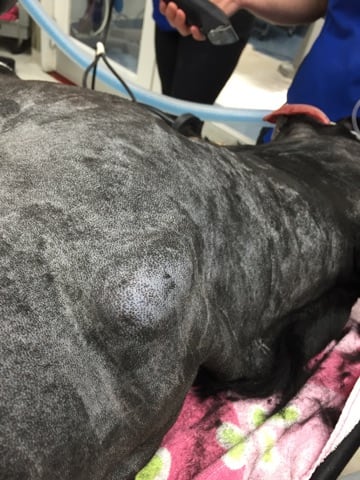 Getting prepped for surgery to remove the foreign body. 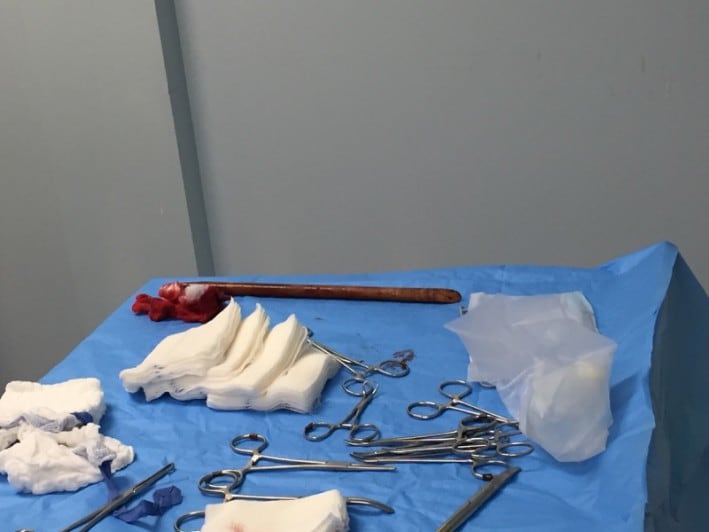 The stick is placed on the instrument table upon removal. 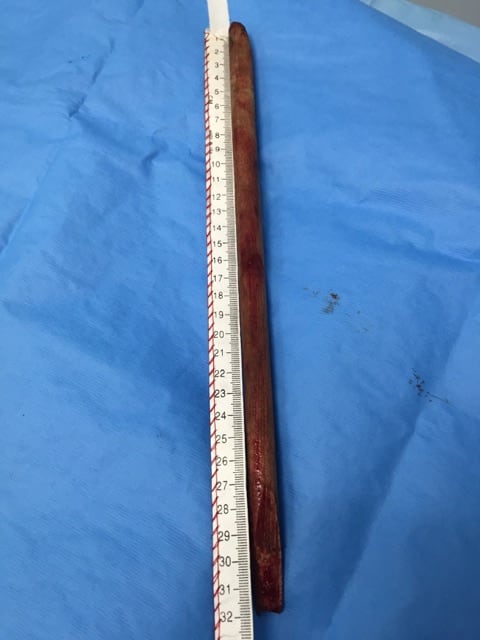 At the completion of surgery, the stick is measured at 32cm! 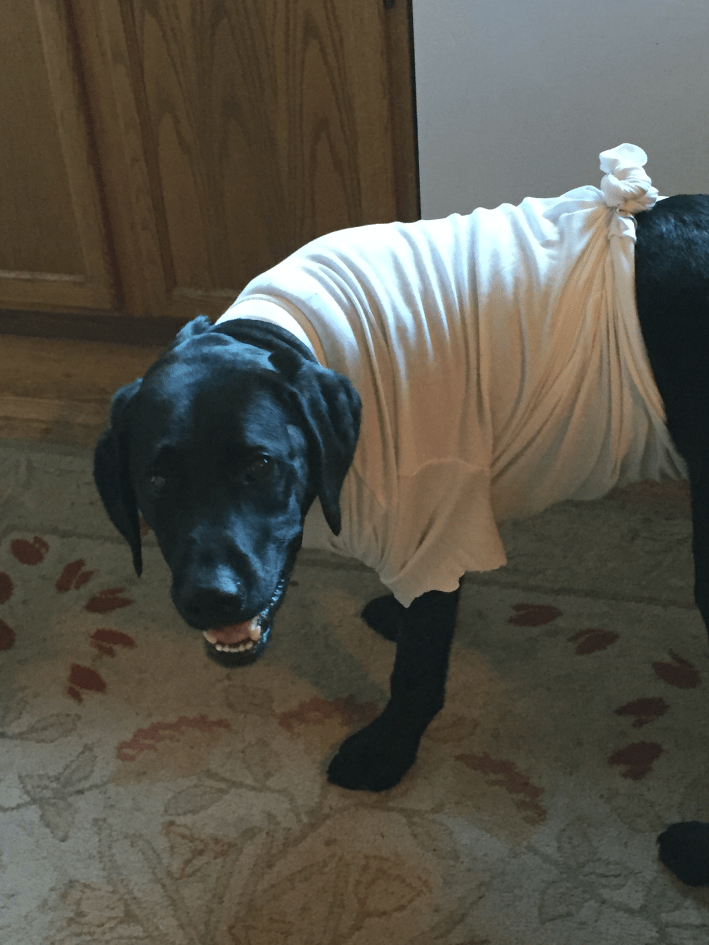 Cooper recovering at home after the removal of the stick. 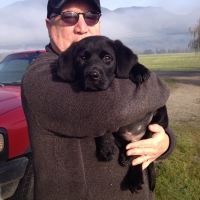 Thanks to Diane for sharing these lovely photos of Cooper! 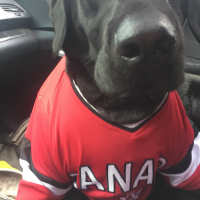 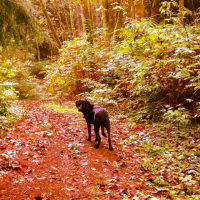 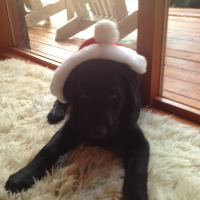