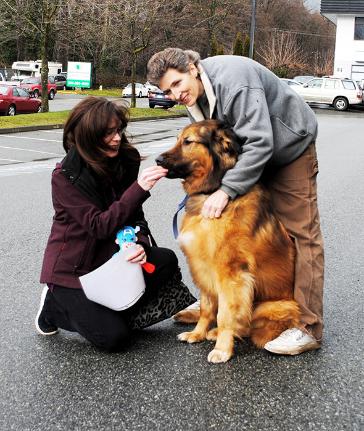 Henrik is very lucky to have a temporary home in North Vancouver.  The two-year-old Leonberger-retriever cross was hit by a car in November, shattering his femur and putting him on bedrest.  Faced with a swarm of high vet bills, Henrik’s owner was forced to surrender him to the North Shore’s Dogwood Rescue.

Thanks to these caring volunteers, Henrik is extremely lucky to have another chance at life. Without them, he most likely would have been put down.

“He’s such a gentle, loving and kind soul,” says volunteer Allison Gibault of the large but gentle dog. His right leg still shaved from surgery, Henrik walks slowly but is eager for attention and a couple treats. Unfortunately, the volunteers soon learned a lot more was wrong with the “gentle giant.”

When Henrik’s recovery didn’t go as well as anticipated, a veterinarian discovered he had pre-existing ligament tears and arthritis in both knees. To make matters worse, Henrik had also broken his hip in the car accident.

But all this pain hasn’t dampened Henrik’s spirit.  “He is our Velcro dog,” says volunteer Brenda Kay, as Henrik leans against her leg. “He looks deep into your eyes and captures your heart in an instant.”

Rifling though a bag for treats, Henrik finally finds his prize. After gobbling them down, he quickly makes his way back to Kay’s side. His favourite stuffed animal, a blue action figure, is nearby.  Henrik still has a long road to recovery. He will eventually need a total hip replacement that will likely take place in the summer when his knee and femur are healed.

“At least he is more comfortable now and hopefully will feel a great deal of relief,” says Gibault, adding Henrik is living with a foster family in North Vancouver she hopes will adopt him permanently.

Dogwood Rescue has found homes for 800 dogs since the organization started 40 years ago. Dealing primarily with “sporting” or “gun” breeds, the group adopted 100 dogs last year and 200 the year before.  Around 30 dogs staying in 14 foster homes on the North Shore are still looking for permanent homes.

Dogwood’s dedicated volunteers make all this happen, but they need your support. Go to dogwoodrescue.org if you would like to donate or see descriptions of the dogs.